CIRS was first used as a term in the 1990s by Dr Ritchie Shoemaker to describe a particular multi-symptom, multi-system chronic illness. Exposure to certain environmental ‘inflammagens’ and pathogenic organisms (which can collectively be termed ‘biotoxins’) is understood to trigger this chronic inflammatory response in the body. According to Dr. Shoemaker, the following are some key considerations:

Dr. Shoemaker’s work is intimately connected with Dr. Dale Bredesen’s work on cognitive decline and both indicate that exposure to biotoxins can be part of the pathway that leads to cognitive decline. Both Doctors also agree that resulting inflammation and eventual hypo-metabolism can be the net result of exposure, thereby contributing to changes in both body and brain function. CIRS can, therefore, be seen as very much part of the cognitive decline jigsaw and is highlighted as being a key part of the ‘Toxic’ or Type 3 presentation in the work of Dr Bredesen. Having been trained by both Doctors, Louise incorporates their Protocols into her work.  Louise participated in Dr Bredesen’s second ever training session at the Buck Institute of Ageing in California in 2016 in order to learn The Bredesen Protocol and in 2018 Louise became the first European practitioner to Certify with Dr Shoemaker. Symptoms can be varied and to some extent ‘invisible’, with neurological symptoms being common.

If you think that your health may have been affected by possible exposure to any of the triggers noted above then please consider the following symptom chart. These are the 37 most frequent symptoms seen in CIRS-WDB. The total score is important to note, but, each alternating colour of the chart indicates a symptom cluster. A cluster score of more than 8/13 can mean that further testing could be considered. The list given here is simply a guide and would be discussed in more detail during an appointment due to the specific nature of some of the symptom details.

The 37 Most Frequent Symptoms Seen in CIRS-WDB 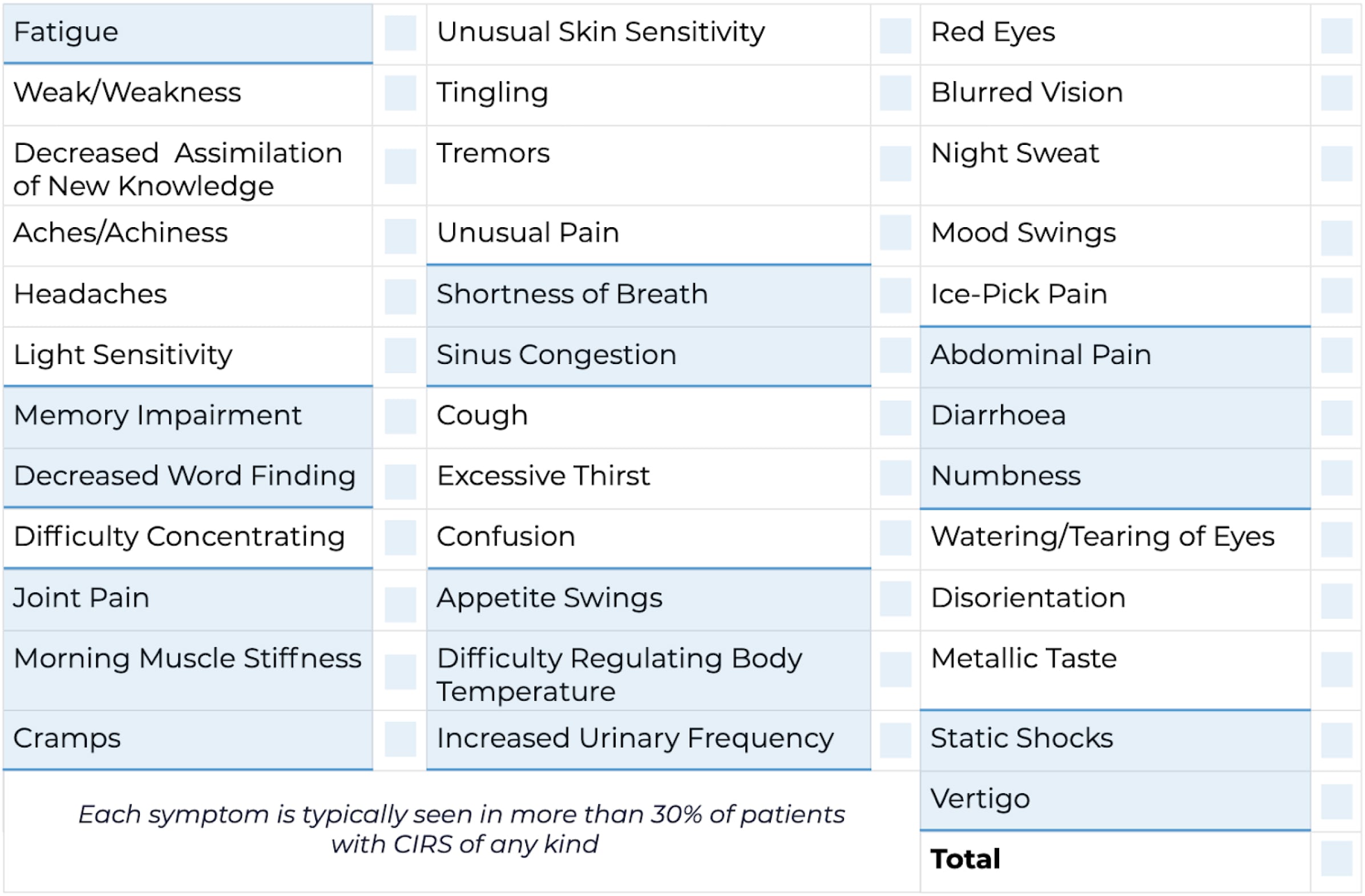 It is also important to be aware that even if you have experienced exposure to a water-damaged building (or any other biotoxin exposure) and feel that your health is compromised, this may not be the only thing affecting your health. All aspects of your health need to be considered to get the fullest picture possible. This is one key benefit to working with a Functionally-trained Practitioner such as Louise! Exposure to certain Herpes viruses may also confer some additional risks relating to immune system priming for example. By working with Louise you will learn more about additional health and lifestyle influences that may be having an impact, and we can also consider genetics too.

Once symptoms and your wider health history have been assessed, then testing can be considered. Some commonly considered tests relating to the CIRS picture are as follows:

Test Markers
Additional Information
Visual Constrast Sensitivity Test (VCS)
This is an online screening test that can be undertaken from the comfort of your own home.  Online screening is a measure of one of the neurological functions of vision called contrast.  We recommend the VCS test available via www.survivingmold.com
CIRS Biomarkers- any combination of these tests can be considered (blood test)
TGF Beta, MMP-9, aMSH, VIP, VEGF, C4a, Leptin, Anti gliadin antibodies/tissue Transglutaminase antibodies, ADH/ Osmolality, ACTH/Cortisol, Leptin & Total IgE (C3a/C5a can be ordered separately) TH17 can also be ordered separately as can a Lyme Western Blot
MARCoNS (nasal swab test)
Swab includes testing for MARCoNS/bacteria, Fungi and MARCoNS Biofilm
Human Leukocyte Antigen (HLA) Test (blood test)
HLA testing of DRB1,3,4,5 & DQB1 is then referenced against Dr Shoemaker’s Rosetta Stone of HLA profiles that associate with increased risk of CIRS
Mould Hypersensitivity Testing
This test measures IgE, IgG, IgA response to common moulds to assess sensitivity level and whether the immune system has previously been ‘primed’ by exposure.  This testing can be important to establish prior exposure and to rule out allergy
GENIE (blood test)
The GENIE test is a gene transcriptomics test that may identify whether the recognised pattern of CIRS is present, and at what Stage (of IV) the patient is currently at.  This test is also useful for understanding more about potential risk of cognitive changes as a result of environmental exposure
Volumetric MRI in order to generate a NeuroQuant Report
NeuroQuant is the preferred volumetric reporting software for CIRS.  Again using Dr Shoemaker’s algorithm it is possible to establish whether changes in key brain areas fit the criteria for CIRS-related processes
ERMI/HERTSMI-2, Actinomycetes, Endotoxin or Mycotoxin Dust Swiffer Testing
Dust swiffer-cloth testing can be utilised to measure components of dust that can correlate with health changes seen via testing listed above

According to a growing body of evidence in peer reviewed studies biotoxin exposure can contribute to significant changes in health for many at-risk people. Risk is understood at this point to be highly associated with HLA type, rendering some people more at-risk than others for environmental-related illness. Dr Shoemaker outlined the pattern of possible response via his Biotoxin Pathway: 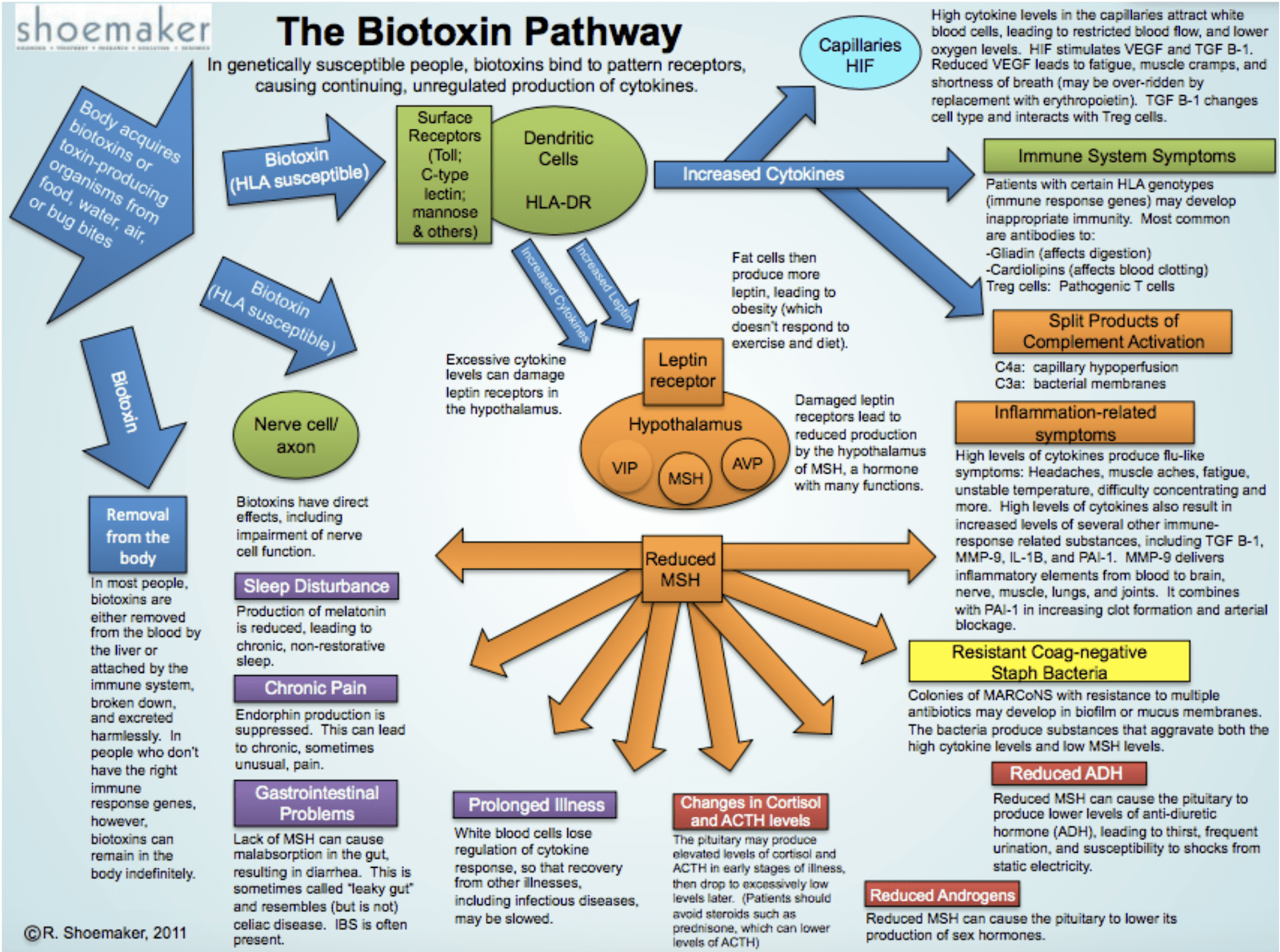 Whilst CIRS is not yet a recognised diagnosis currently in Europe, CIRS has been accepted as an umbrella term in the United States to describe a syndrome where there has been:

1. Evidence of exposure (e.g. biotoxins from a water damaged building or any of the other triggers listed)

2. Signs and symptoms consistent with exposure

Points 1-3 have been covered above and then point 4 relates to the Shoemaker Protocol itself. We use the Shoemaker Protocol as a framework around which to structure a therapeutic protocol. If medical support is required then we can refer on to prescribing practitioners that we work with collegiately and you can then either continue to work with both of us, or transition to solely medical support. For those wanting to undertake a more naturopathic approach that also takes into account wider health factors and does not rely on prescribed medication, then we will work with you to the fullest extent possible.

The Shoemaker Protocol is outlined below:

Your own progress though your personalised Protocol will depend on your initial test results and response to each step. Your Protocol can be amended to a more naturopathic one that does not require medical support should your symptoms indicate this is a reasonable pathway, and in such circumstances, the Protocol will be utilised simply as a framework.

Louise’s perspective on CIRS falls within her naturopathic and Functional Medicine training which highlight the importance of barrier function, trophic support and nutritional status.

Experiencing CIRS is about so much more than the initial exposure; it centres around someone’s individual response which is why so much focus is placed on the Biotoxin pathway rather than just simply a ‘detoxification’ process. If you have any questions please let us know via info@louisecarder.com 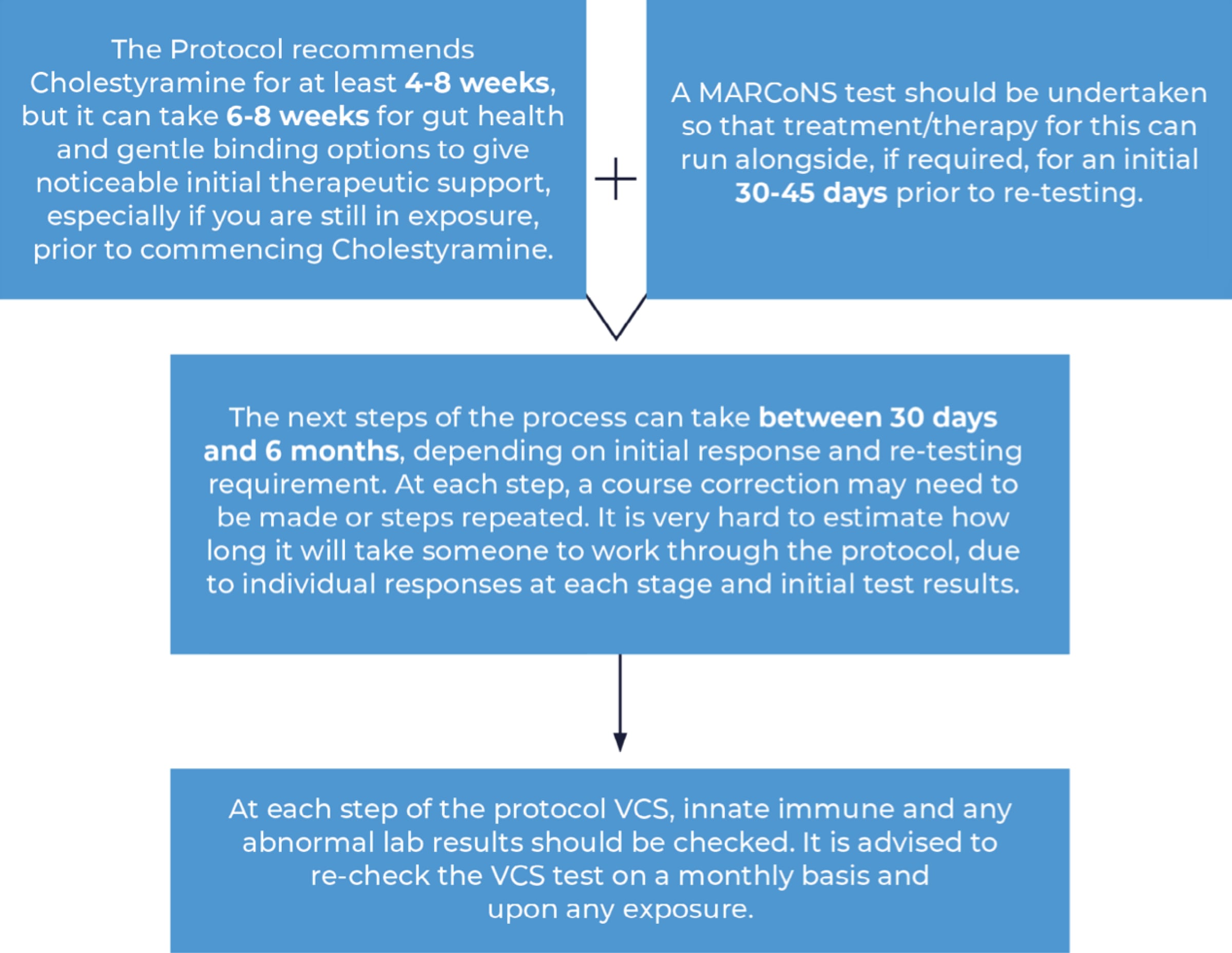 Subscribe to our newsletter and and stay connected to clinic news, events, delicious recipes, blog notifications, courses and discounts.  Basically all the things that go to creating our community.  It will be lovely to have you join us.

You can unsubscribe at any time.
Thank you! You're now subscribed.
Oops! Something went wrong. Please make sure you submit a valid email address.